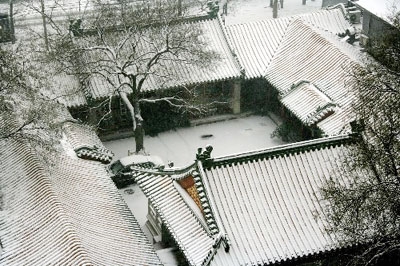 This photograph was taken after an early winter snow from our Hotel near Forbidden City.  We thought the roof lines outlined by the wisps of snow were beautiful.
Hutongs (simplified Chinese: 胡同; traditional Chinese: 衚衕; pinyin: hútòng; Wade–Giles: hu-t'ung) are a type of narrow streets or alleys, commonly associated with northern Chinese cities, most prominently Beijing.

Since the mid-20th century, the number of Beijing hutongs has dropped dramatically as they are demolished to make way for new roads and buildings. More recently, some hutongs have been designated as protected areas in an attempt to preserve this aspect of Chinese cultural history.